In 2012, the City of Philadelphia launched the Central Germantown Business District Beautification Plan, a guide for short and long-term physical improvements, including a list of 24 reconstruction recommendations for Germantown. The renovation of Chelten-Greene Plaza is next on the list.

The large plaza, which encompasses a bus stop for the SEPTA X and XH routes, began undergoing a $740,000 makeover in late February. Tomarra Sankara-Kilombo, a Germantown resident who regularly uses the stop, said it is more than just a place to catch a bus.

“That’s the place where black people seem to congregate,” Sankara-Kilombo said. “ It’s not just like, oh, I’m getting on the bus.”

Digesh Patel is owner of Chelten Avenue Newspaper Stand, located on the Chelten Avenue side of the plaza. He said he has watched the area fall apart and is looking forward to the benefits reconstruction will bring, including the planned picnic tables that will be just a few feet from his stand.

“Yeah, it’s gonna be good for me,” Patel said. “ I’m still getting good, free traffic from the bus stop and stuff, but once the people see this is new, there is gonna be more people coming to the park.

In addition to tables, the reconstruction will include seating, a glass bus shelter, and a new entrance to Vernon Park. Landscaping will introduce trees and a large flower bed.

The hope is that the makeover will improve the Chelten Avenue business corridor. “This plaza may be small in size, but the renovations will be a big boost for the commercial corridor,” said Eighth District Council Member Cindy Bass. “This is a great example of public investment strengthening the neighborhood.”

The beautification project was designed by city planner Ian Hegarty with input from several Germantown Registered Community Organizations, Councilwoman Cindy Bass’ Office, the School District of Philadelphia, and other organizations and charter schools in the area.

Although the project will provide a spacious, sheltered bus stop, Sankara-Kilombo wishes the city had done a better job of informing neighbors about the construction. The plan was released in 2012, but Sankara-Kilombo said it’s common for residents to forget years and months later.

“How could something be going on for supposedly years, but the few months leading up to it is dead, quiet, and all of a sudden, everything’s torn up?” Sankara-Kilombo said.

Hegarty said the city kept the community involved with the design process over the past eight years through specifically community meetings. Friends of Vernon Park hosted several information sessions in July 2016, February 2018, and September 2019.

Additionally, Hegarty showed most of the final design at Germantown Friends School in March 2018 but information was not relayed directly to residents.

Construction is scheduled to be completed by October 2020. There will be periodic closures of the plaza, sidewalks, and the driveway serving buildings on the north side of Chelten Avenue. The northbound H and XH bus stops will be temporarily relocated to the northeast corner by Joseph E. Coleman Library.

Germantown Behind the Headlines: The Future of Safety 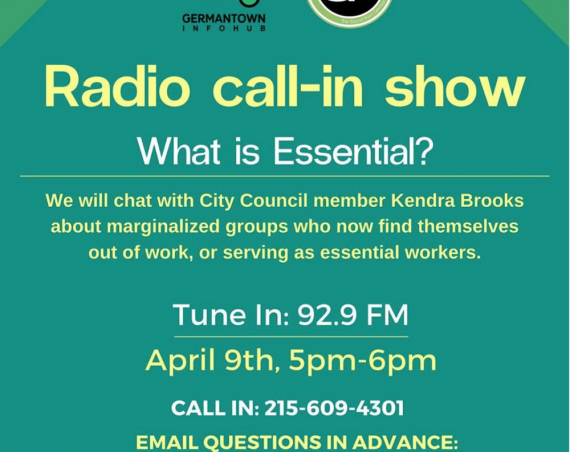